The Evolution of the Pittsburgh Steelers Jersey

Starting with the historic striped “bumblebee” threads of the 1930’s and devolving into the italics-inspired jerseys of today, the Pittsburgh Steelers jersey has undergone quite the evolution over more than 80 years of existence.

Black and yellow has always been a constant, save for the 1943 season that saw Pittsburgh and Philadelphia’s pro teams combine into the “Steagles” during World War II. A distinct nod to the city’s dominant Steel industry, the Steelers’ name, colors and uniforms have always amplified that connection.

In the case of the Steelers, the jersey has come to represent an 82-year history during which they transitioned from an also-ran team with the longest record for going without a championship pre-merger to the team with the most Super Bowl wins (6), most Super Bowl appearances (8), most conference championship appearances (15), most conference championship games hosted (11), and most AFC championships (8) post-merger. Arguably one of the most successful teams in the modern era, the black and gold represents years of toil, hardship, and long-due redemption for a team as hard as the reputation of its host city.

The History of the Steelers Jersey In 1933, sports promoter Art Rooney purchased an NFL franchise for $2,500 with the intentions of converting his semi-pro team, the Majestics, into a pro team. As was tradition at the time, Rooney changed the name of the team to the city’s baseball team name, the Pirates.

The 1933 jersey was engineered to give the ball carrier as much of an advantage as possible: The black vertical stripes on a gold background are actually raised felt, meant to cause friction against the ball when the carrier presses it to his body to reduce the possibility of fumbles. The original 1933 jersey also bears the coat of arms for the City of Pittsburgh on its chest as a way of getting the hometown crowd behind them.

The 1933 jersey was no longer thought to exist, and no high-definition photos or diagrams are available. When the Steelers sought to recreate the jersey for its NFL 75th Anniversary throwback in 1994, they were unable to make a faithful reproduction, as the exact design of the coat of arms is also lost to time. The throwback featured non-raised stripes and the current city crest.

The 1934 jersey featured raised stripes running horizontally. Instead of the coat of arms, two black-framed black-on-white number panels appeared on the chest – a unique feature among NFL jerseys. It’s this jersey that became the “bumblebee” throwback.

1940: The Pirates changed their name to the Steelers in reference to Pittsburgh’s steel industry. To help build morale, the White House asked the Steelers to continue playing – despite the fact that most of the team’s line-up had been drafted into World War II.

To cope with the financial stresses, manpower shortages, and diminished market in 1943, the Steelers merged with Pennsylvania’s other NFL team, the Philadelphia Eagles, becoming the “Steagles.” The team played in both Pittsburgh and Philadelphia and embraced the Eagles’ green and white: the new jersey featured white chest numbers and vertical sleeve stripes on a seafoam green jersey. The merged team finished the 1943 season with the Steelers’ second winning-season record (the first was the year prior).

In 1944, Steelers merged with the Chicago Cardinals as a result of an uneven number of teams in the league, forming the “Card-Pitts.” This marks the Pittsburgh franchise’s only winless season. The experiment ends in 1945 when the Boston Yanks permanently merge with the now-defunct Brooklyn Tigers. The first “modern” Steelers uniform – the black at-home jersey with gold horizontal sleeve bands and gold chest numbers – emerged in 1953. The helmet transitioned from leather to plastic, although facemasks didn’t become mandatory until the 60’s.

1963 marked not only the first use of the Steelers’ logo – based on U.S. Steel’s three-points logo – but also introduced a new away uniform, white with yellow diamond-shaped number patches at the shoulder, black chest numbers, and black sleeve and collar cuffs.

The logo is placed on the right side of the helmet only, allegedly because owner Art Rooney was on the fence about it. The right-side-only helmet logo is now Steelers tradition. 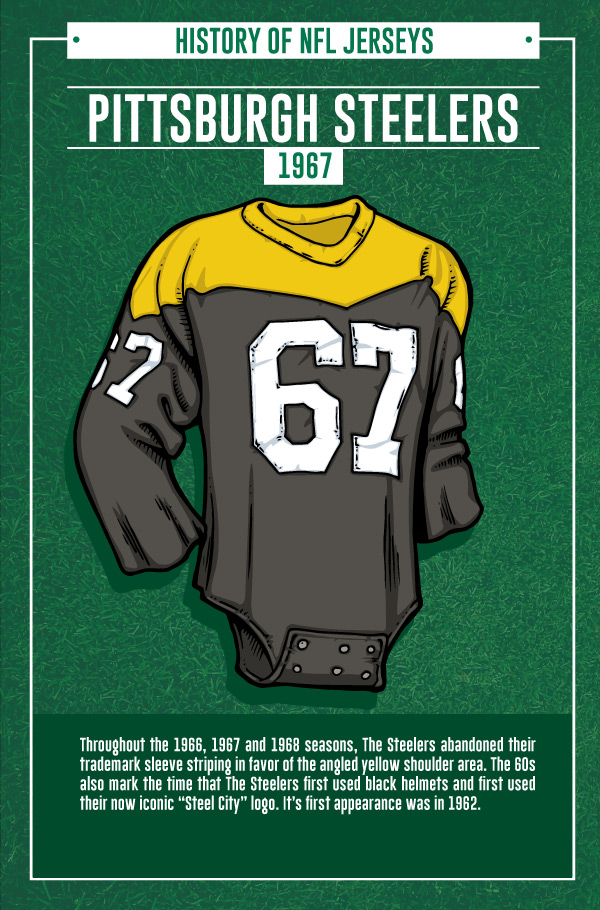 1967 marked the debut of a new home uniform: a black jersey with a yellow diamond “yoke” at the shoulders and collar and white numbers at the chest and high on the sleeves. The Steelers are the only team to use anything other than a rectangular “yoke” on their jerseys. The “Caped Crusader” jersey – so named because it resembles Adam West’s Batman costume – was designed to stand out from other NFL jerseys and to draw attention to the Golden Triangle development in Pittsburgh.

The players hated the jersey, and the triangle faded easily.

From the team’s inception until 1971, the Steelers only had eight winning seasons. The ’70s change all this, starting with the 1974 season that nets the team its first league championship at Super Bowl IX. Quarterback Terry Bradshaw, defensive tackle “Mean Joe” Greene, defensive end L.C. Greenwood, defensive tackle Ernie Holmes, and defensive end Dwight White wear the white away jersey with gold horizontal stripes and black shoulders and chest numbers. A new home jersey followed the 1974 away jersey in design, with a black jersey with gold and white alternating stripes and white numbers on the shoulders and the chest. A white American Bicentennial patch appeared on the jersey for Super Bowl X. Bradshaw and the “Steel Curtain” win the Super Bowl this year, as well as in 1978 and 1979.

With minor alterations, the 1974 and 1975 jerseys are still used today. However, in 1988, the Steelers added an “AJR” patch to their jerseys to mark the passing of Rooney.

The Black, White, and Gold The modern-day changes to the Steelers jersey began to take shape in 1997, when Nike took over production of the uniforms and introduced the italics-style numbering that is still prominently featured on today’s unis.

In 2000, the Steelers logo patch was permanently added to the jerseys at the left shoulder, and the NFL logo was introduced to the front of the collar – as it is for all NFL jerseys.

Through the 21st century, the Steelers have kept steady with the italics-style numbering while remaining with the yellow sleeve stripes and front-left logo display. With accents honoring the past and added twists in the last 20 years, the Steelers jersey blends tradition with modernity as much as any other NFL uni. In 2015, the NFL rolled out a new Color Rush jersey campaign featuring bright and vibrant spins on teams’ current uniforms. The Steelers, however, have too much prestige to do a jersey spin-off without honoring their history.

As such, Pittsburgh rolled out a throwback yellow as a nod to the 1953 jerseys seen above. The sleeves also received a face-lift to reflect the throwback jerseys.

With the Steelers Color Rush jersey, the team perfectly blended its history into the NFL’s new initiative. When the Steelers pair these with black pants featuring a sleek yellow stripe down the side, the colors contrast in a way that resonates with old-school Steelers fans and new-age diehards alike.

For a city as hard-nosed and hard-working as Pittsburgh, the Steelers are the ideal team. They didn’t see a championship for their first 38 years, they had to fight for respect and recognition, and they were regularly lost in the haze of Philadelphia’s and New York’s bigger-market teams. Yet, the Steelers are six-time Super Bowl champions, still owned and run by a direct descendent of its founder who never moved, and the team is still the fixture in Pittsburgh society it was more than 80 years ago.

Many of today’s Steelers players embody that resiliency in their own respective ways. James Conner, Antonio Brown, JuJu Smith-Schuster and T.J. Watt have each been overlooked through their careers, only to become some of the best players in the league at their respective positions.

The black, white, and gold have came to represent the tradition of the NFL’s most storied team, and, like the team, the history and evolution of the jersey represents a never-ending passion for what could be and what was.

Shop for a Pittsburgh Steelers jersey on Fanatics: