The Most Hardcore Football Fans

Are you a die-hard NFL fan? If you are, you know that a championship is the goal of each season. While fans can’t actually do anything to ensure their favorite team gets to hoist the Lombardi Trophy, we surveyed them to find out exactly how hardcore they really are.

Will Eat Cockroaches For a Ring Although a bowl of bugs might not be the go-to meal for most of us, some fans are willing to chow down some roaches if it guarantees their team’s victory. In fact, 41 percent of Carolina Panthers fans are willing “to take one for the team” and munch on some cockroaches for a trophy.

This may be because they haven’t yet clamped down on a single championship in 23 seasons, though the team came very close to tasting victory in 2015.

Right behind the Panthers fans, you’ll find the Los Angeles (formerly St. Louis) Rams fans – 40 percent of whom would say “yes” to a bowl of roaches. The Rams, who recently relocated back to Los Angeles, have one championship win to their name (although they do have two championship trophies dating back to their pre-merger days), so they may be a little more eager in that regard.

The rest of the top 10 include a bevy of other teams that haven’t had a ton of recent championship successes, aside from the Pittsburgh Steelers with 29 percent of their fans yearning for that seventh ring.

Puttin’ on the Pounds 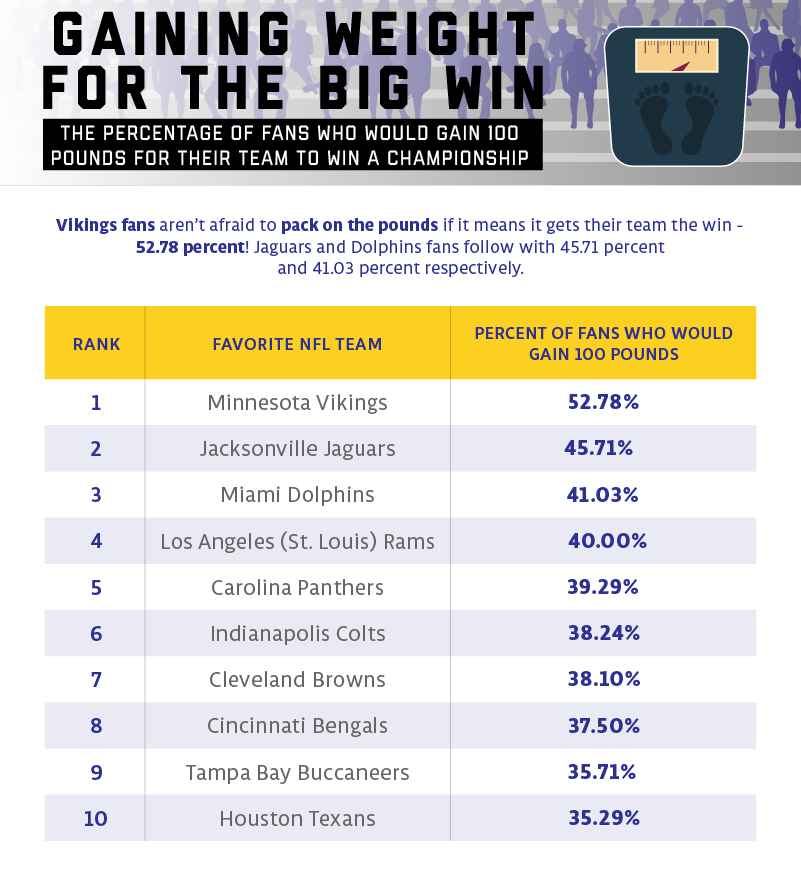 Gaining 100 pounds would most likely be detrimental to your health … but if that could guarantee your favorite team’s win, would you do it? It turns out that some NFL fans would be fully onboard with this idea, especially Minnesota Vikings fans. A whopping 52.8 percent said they’d pack on the pounds for a championship win, something they’ve been waiting for over 57 years. 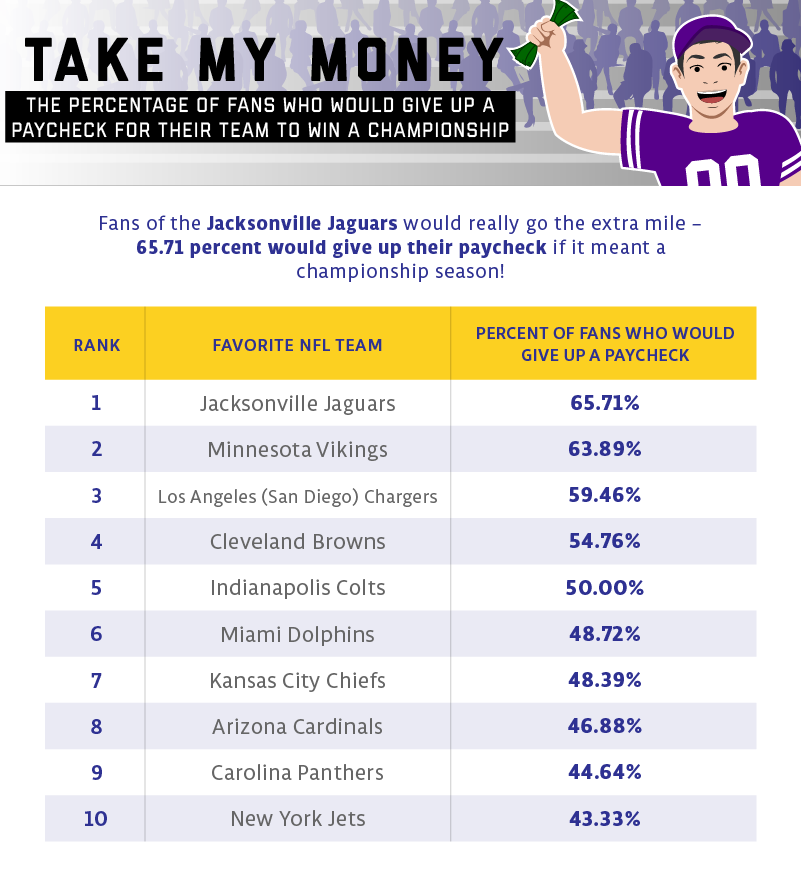 Some ardent NFL fans are willing to give up an entire paycheck if it could ensure their team’s championship win. Jacksonville Jaguars fans, in particular, would go above and beyond to guarantee a win, with more than 65 percent of respondents saying they’d pay up if a victory was ensured. More than 63 percent of Minnesota Vikings fans answered the same, and 59 percent of Chargers fans said they’d gladly pay to receive a victory parade.

Other NFL fan bases that are extraordinarily committed to their team’s success include Cleveland Browns fans (54 percent) and Indianapolis Colts fans (50 percent). An intense desire for a championship win doesn’t usually involve serious dental work, but some diehard football fans said they’d undergo a root canal if it meant their team could win it all. In fact, more than 80 percent of Minnesota Vikings fans would definitely go for it. But they’re not alone, as nearly 67 percent of Rams fans and 66 percent of Eagles fans would also be down  for a root canal. 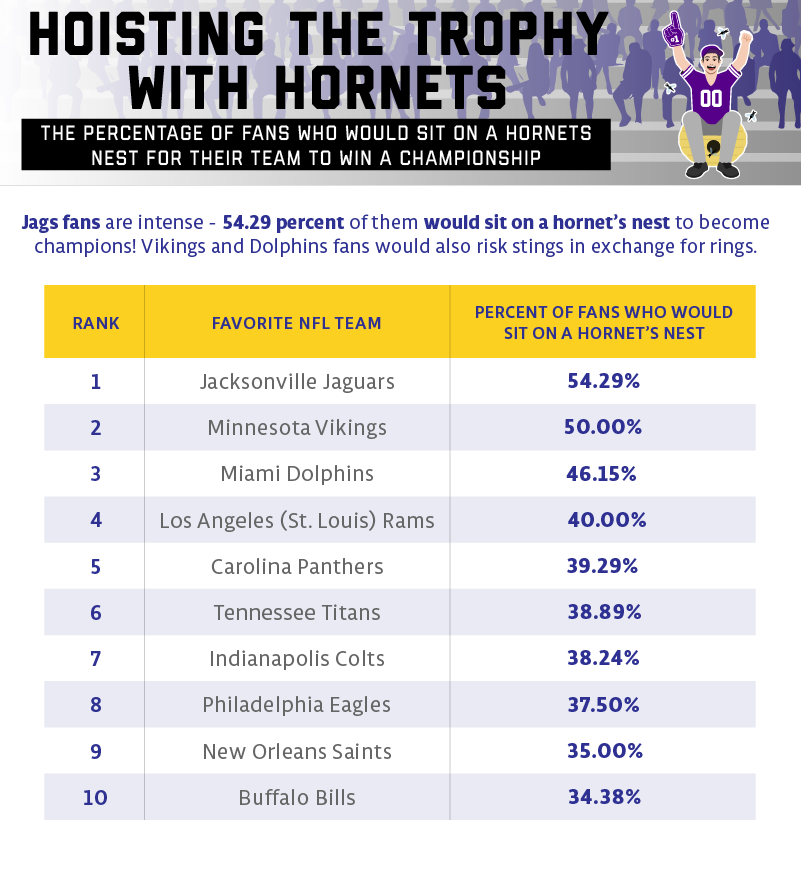 What’s a hind end full of hornet stings compared to winning the championship? Well, for 54 percent of Jaguars fans it’s really no big deal, as they’d gladly plant themselves on a hornet’s nest for their team’s championship trophy. Vikings fans are nearly as steadfast, with 50 percent willing to do the same. Dolphins fans aren’t far behind in the hornet-sitting department at 46 percent, and Rams fans clock in at 40 percent.

Panthers fans would also get in on the hornet’s nest action, with 39 percent saying “yes,” while nearly as many Titans, Colts, and Eagles fans would volunteer to sit on one as well. Saints fans (35 percent) and Bills fans (34 percent) round out the top 10 fan bases that would gladly park their keester on a hornet’s nest in exchange for a championship victory.

Bathing is For the Birds 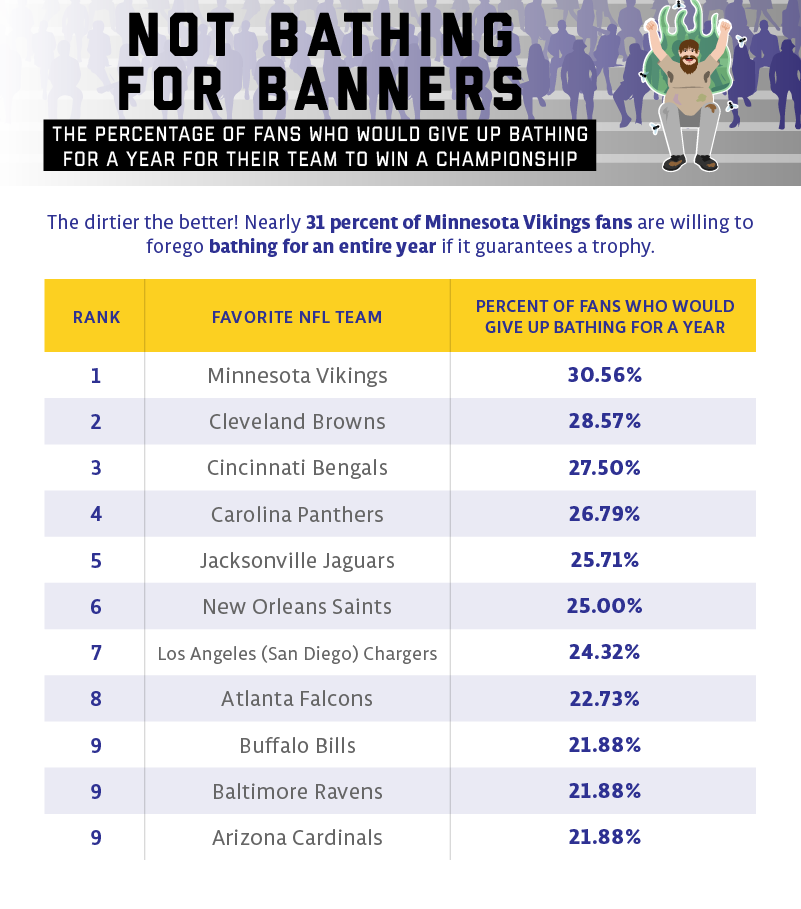 Could you go without bathing for a year? No showers, no baths, no nothing … just months and months of accumulating grease and grime. While that sounds pretty awful, there are plenty of NFL fans who would go without a proper cleanup for an entire year if it meant their favorite team could win a championship.

Minnesota Vikings fans lead the ranking as more than 30 percent said that a championship win is worth a year of built-up dirt. Browns fans aren’t far behind at nearly 29 percent, followed by Bengals fans at 27.5 percent.

These Fans are the Most Hardcore When comparing a fan base’s hardcore ranking with their team’s win percentage, Vikings fans are the most die-hard fans out of all of them. The team’s win percentage over the last 10 seasons is perfectly average, but that doesn’t suffice to satisfy their fans as they’re desperately yearning for a championship win. After four appearances and no trophy to show for it, they’re ready to do whatever it takes to bring one home.

Jacksonville has the second most hardcore fan base, though Jaguars fans are still wishing for a winning season. Their win percentage of 0.331 over the last 10 seasons is definitely shy of 0.500, and a lack of victories certainly weighs on the fans.

Cleveland Browns fans have been pretty bummed recently, as their 10-season win percentage is a mere 0.300. This, paired with their lack of championship appearances, certainly helps boost their fans’ willingness to go through some pretty wild stuff to guarantee a win, and can you really blame them?

There are a few NFL teams whose 10-year win percentage is above 0.500 including the Panthers, Colts, Saints, and Bengals, but their fans would still be willing to tackle hardcore tasks in order to guarantee their victory.

In it to Win it

While you’ve probably heard of fans who always wear their lucky socks (and never wash them), or other steadfast proclamations of extreme fan loyalty, not every football fan will eat a bowl of roaches or sit on a hornet’s nest in order for their team to win the championship. However, there are definitely fans who will go that extra mile, or would … if it was actually possible to guarantee that ring.

No matter which team you root for, Fanatics has a huge variety of fan gear for every NFL team, and you don’t have to undergo a root canal to shop here and get sweet swag shipped directly to your house for your next watch party or stadium excursion.