The Philadelphia Phillies established a name for themselves after the club’s formation in 1883. At the time, although difficult to imagine, history was being made in the realm of American sports. The Phillies are the “oldest, continuous, one-name, one-city franchise” throughout all professional sports in the U.S. Since their inception into the MLB, the Phillies have brought home two world championships and seven league pennants.

Originally dubbed the Philadelphia Quakers, the squad changed its moniker to the Philadelphians – striving to depict the City of Brotherly Love accordingly. The new name was often shortened to the Phillies and eventually became the official term used to represent the Philly-based team.

Beyond the historic architecture and cobblestone-lined alleys, one finds the Citizens Bank Park situated on Philadelphia’s south side. A world-class ballpark – rated as one of the finest ballparks in the league – Citizens Bank Park is a baseball sanctuary for Philadelphians to congregate, celebrate America’s pastime, and cheer on the Phillies, of course.

During the building boom of modernized ballparks, no other team deserved a new home stadium than the league’s oldest franchise, the Phillies. For more than three decades before the construction of the Citizens Bank Park, the Phils hosted opponents at one of the most rundown “diamonds” in the league, Veterans Stadium. The multipurpose stadium was also home to the Philadelphia Eagles at the time and was notorious for its inferior playing turf.

The Phillies christened their brand-new ballpark on April 3, 2004, during an exhibition game against the Cleveland Indians. The stadium is capable of hosting nearly 44,000 cheesesteak-lovin’ Phils fans and features a spectacular view of the downtown skyline. Each time a long ball is smashed into the stands, fans are treated to a little home run hullabaloo. An enormous, neon-pulsating Liberty Bell illuminates centerfield as a bell and clapper sway independently, chiming throughout the stadium.

Home runs are frequently belted into the bleachers at Citizens Bank Park, so be sure to keep your heads up and gloves open! In the 2016 season alone, there were a total of 200 dingers, with the farthest home run smacking off the bat of former first baseman, Ryan Howard, and traveling a true distance of 462 feet. 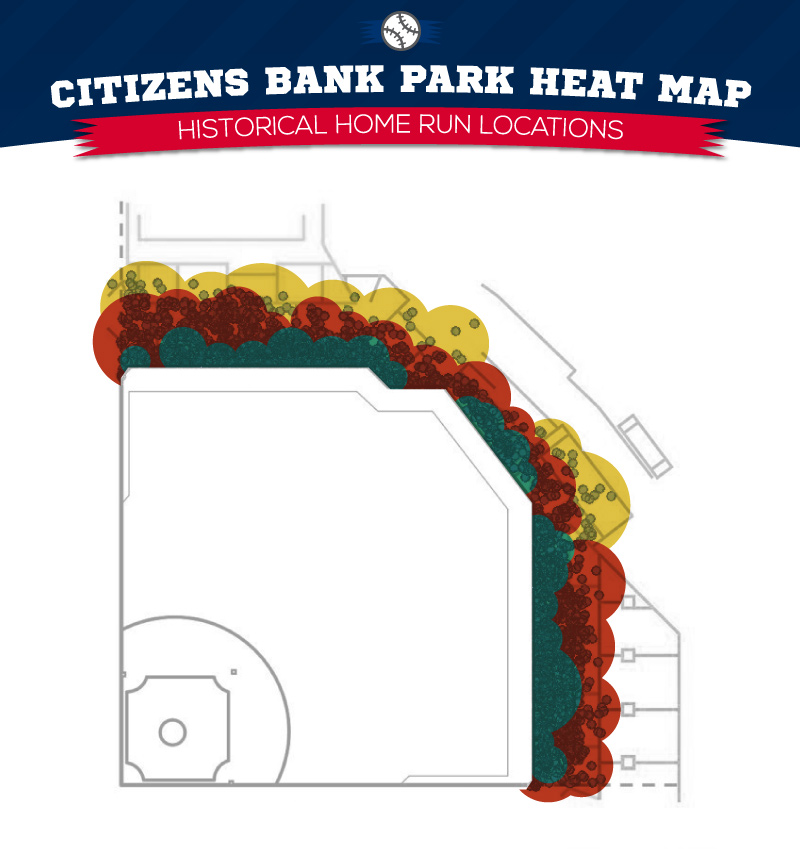 Looking to grasp a homer from the convenience of your selected seat? Check out our findings to find the best spots to sit.

Our heat map suggests situating yourself just beyond left field in sections 142, 143, and 143 – increasing the likelihood of bringing that souvenir ball home. Thrillseekers will settle up top along the scoreboard porch, or sections 242, 243, and 243, to boost their chances. Another hub for home runs is behind right field and down the first baseline in the pavilions (sections 203, 204, and 205).

Heading down to the City of Brotherly Love? Before stuffing your face with a mouthwatering Philly cheesesteak, stuff your wardrobe with the latest Phillies fan gear on the market! Fanatics has you covered from head to toe. Be careful––those cheesesteaks can get pretty messy.