The Evolution of the Barcelona Jersey

Futbol Club Barcelona was founded in 1899 by soccer pioneer Joan Gamper who placed an ad in a local paper and garnered the attention of 11 other enthusiasts. The club has since transformed into the second most valuable football organization in the world and is one of the most popular clubs around the globe.

From their beginning, Barcelona has enjoyed success in the highest level football league in Spain – La Liga. Along the way, their trophy case has become quite packed as well. In addition to 24 La Liga title wins (most recently in 2015-2016, and second only to rival club Real Madrid), Barcelona has nabbed 29 Copa del Rey championships and several Champions League Titles (most recently in 2014-2015).

Since this club has been around for over a century, its jerseys have understandably transformed throughout the decades. As you can imagine, Barcelona’s current star, Lionel Messi, doesn’t wear the uniform that players such as Paulino Alcántara donned in the early 20th century. However, the one constant feature has been the kit colors: blue and claret – a deep purplish-red color.

Read on to see the Barcelona kit changes that have taken place over time, in addition to how the club’s blue and claret stripes have evolved yet remained so starkly similar.

1899: The first Barcelona jersey in 1899 is simple with stripes and a standard collar. It is comprised of four thick, alternating blue and claret stripes: one on each sleeve and two on the main body. Carles Comamala – a prolific goalscorer – is one of the players from these early days, replacing Barcelona founder, Gamper, when he retires from the field. 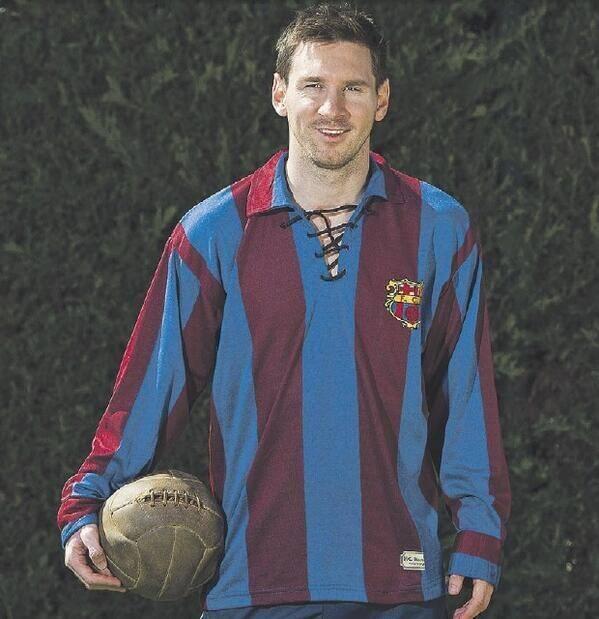 1920s: Barcelona adds a tie closure to the jersey’s neck, memorably sported by players such as Ramon Torralba Larraz – a 14-season legend. The kit also features more alternating stripes than previous versions, with several on the sleeves and body. The stripes on the primary section of the jersey remain similar today, despite a few variances. 1925: The standard collars are replaced by a slight crew neck design, hence eliminating the tie closures, which do not make any future appearances on the Barcelona kit. 1969: The crew neck collar will remain a staple of the blue and claret jersey throughout many decades, dozens of players, and multiple seasons. In the late ’60s, the standard collar makes a comeback, and one player, Francisco Fernández “Gallego,” dons the kit proudly on his way through 11 seasons with Barça. 1982: Standard collars remain on the ’80s kits. Javier González Urruticoechea – a key player in the 1984-1985 season – is one player who not only sports the jersey but also gains the adoration of fans due to his charisma and monumental save that ensures Barcelona a league victory with four matches to go. 2000: At the turn of the century, a blast to the past occurs, with two thick stripes on the main body (one of each color) and solid dark blue sleeves. Vitor Borba Ferreira “Rivaldo” plays during this apparel shift and racks up goals despite not being a straight striker. 2002: The uniforms feature the previous thinner stripes and a brighter red compared to the old claret. However, this doesn’t last long. In 2007, the color returns to a deeper reddish-purple. Samuel Eto’o is a player for Barcelona who wears the brighter red jersey while being the league’s top scorer for the 2004-2005 season. 2013: Barcelona’s kit continues to evolve with a single red stripe down the center, flanked by blue sleeves. In 2015, Lionel Messi is seen in another kit design, featuring a subtle reversal of the classic blue and claret combo. 2016: The jersey appears more similar to previous versions, consisting of the standard blue stripe bordered by reds, then lined with blue sides and sleeves.

Whether you hope to catch Barcelona this upcoming season at Camp Nou or are rooting for them from the comfort of your home, you can grab your own Barça jersey at Fanatics.com.

The Giants Classic Jerseys Return in 2022. Take a look back at their jersey history.