The Evolution of the Washington Redskins Logo

The Washington Redskins are one of the older NFL franchises around, but they didn’t get their start as the Redskins, nor were they even in D.C. at the time. In fact, businessmen George Preston Marshall, Vincent Bendix, Jay O’Brien, and Dorland Doyle bought a NFL franchise for Boston in 1932. The team played at Braves Field and were then known as The Braves – the same name as the Boston Braves, a National League baseball team.

The following year, the club took the field at Fenway Park, and Marshall chose a new name for the squad: The Redskins. Although legend has it he chose the name to honor Native American head coach William “Lone Star” Dietz, further investigation suggests that he picked a similar name to the original Braves moniker to avoid confusion with the baseball team – and so he could keep using the same logo.

In 1937, the NFL approved the transfer of the Boston Redskins to Washington, D.C., and an official marching band (the first of its kind) was formed to welcome fans from the moment they entered the gates. Since then, the team has enjoyed a few historical seasons during its tenure, the first being the strike-shortened 1982 season when they won their first Super Bowl. Led by the legendary Joe Theismann and his favorite target, Hall of Famer Art Monk, the team reached the championship again the next season, but fell to the Raiders in the 1983 Super Bowl. The Redskins took down the Broncos to win their second Vince Lombardi Trophy after the 1987 season. Their third Super Bowl win came in the 1991 season, when they outscored the Buffalo Bills in Super Bowl XXVI.

While the Redskins haven’t advanced very far in the playoffs since those victories (they lost in the divisional round three times and in the wild-card round three times since their last Super Bowl win), they have had several superstars on their roster. For example, Clinton Portis started out in Denver, but he wound up in D.C. after two seasons with the Broncos and enjoyed several successful seasons as the Redskins’ featured running back. Santana Moss caught over 1,000 yards as a Redskin several times, and Charley Taylor is a Hall of Famer who saw playing time in the ‘60s and ‘70s as a halfback and wide receiver. Redskins fans also fondly remember promising safety Sean Taylor, who was shot and killed by a home intruder in 2007, three years after being picked fifth overall in the NFL draft.

Through the many decades of Redskin action, how has their logo fared? Let’s take a look. 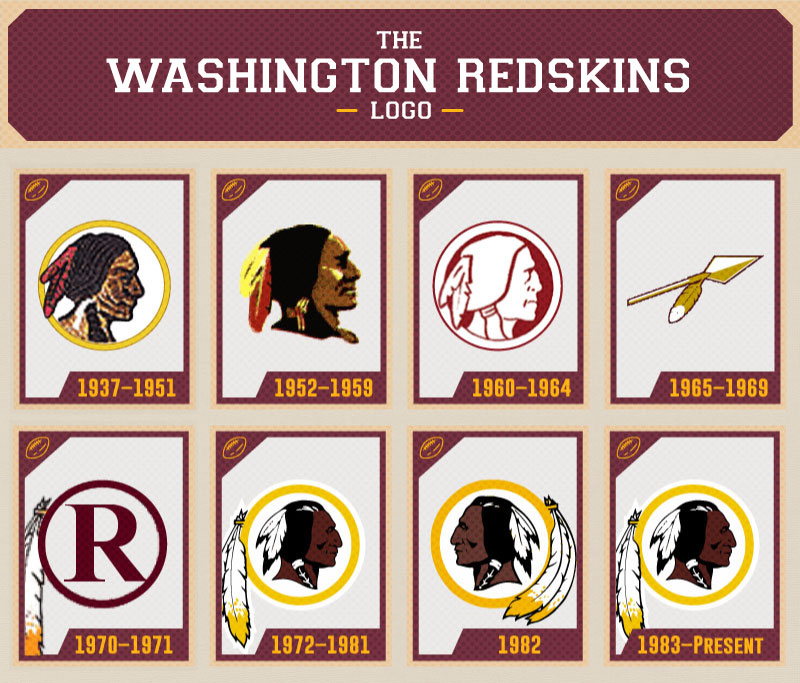 1937–1951: When the Redskins become the Washington Redskins, they go from a simple wordmark as members of the Boston Redskins to an early version of today’s familiar logo. The profile of a Native American is featured in a white circle with yellow trim, and he has two red feathers in his hair.

1952–1959: A similar design debuts, but this one lacks a circle and the two feathers are yellow and red.

1960–1964: A simpler logo appears in 1960 and depicts a silhouette image of a Native American in white against a red background.

1965–1969: The Native American is no longer featured in the logo. Instead, the logo is a white and gold arrow decorated with a single feather.

1970–1971: During his brief tenure with the Redskins before his death, Vince Lombardi pushes for a new logo that is revealed in 1970. It features a red “R” in a circle with two feathers hanging down from the side. It’s said he was inspired by the logo of another team he coached, the Green Bay Packers.

1972–1981: Discussions with Native American leaders takes place prior to the next logo change. One such leader, Walter “Blackie” Wetzel, strongly encourages and approves this new logo, which features a Native American within a yellow circle against a white background. The profile of the Native American wears two feathers, and the circle is adorned with two feathers as well.

1982: Briefly, the Redskins use a tucked feather design because the decals used for the helmets aren’t sticking properly near the tail-end of the hanging feathers.

1983–Present: The Redskins return to an earlier version (with hanging feathers). This is how the logo remains today.

Hail to the Redskins

If you love the Redskins, make sure you have all the right gear. Good news – Fanatics.com has exactly what you’re looking for, from jerseys to sweet throwback gear to tailgaiting must-haves. Hail to the Redskins! #HTTR