The Evolution of the Washington Nationals Uniform

Numerous baseball teams have called Washington, D.C., home. The Washington Senators were a founding member of the American League before rebranding as the Minnesota Twins in 1960. Another Washington Senators organization briefly surfaced around the same time before becoming the Texas Rangers. The city would spend 33 years without a team until the Montreal Expos relocated to Washington in 2005 and eventually became the Washington Nationals.

The Expos were the first team to play in Canada, and although the franchise doesn’t have a direct affiliation with previous Washington teams, the modern-day Nationals were inspired by the nickname of the 1933 Washington Senators – “Nationals,” or “Nats” for short.

The Nats were presented with a brand new stadium in 2008 and have called Nationals Park home ever since. The modern facility is located south of the U.S. capitol, alongside the rapidly developing Capitol Riverfront. Nationals Park currently seats nearly 46,000 fans and is one of the few MLB ballparks to be accredited as a Leadership in Energy and Environmental Design (LEED) Structure.

As Fanatics do, we decided to depict the details of the Nationals’ ever-changing uniform throughout their years in the league. Read on to see how these red, white, and navy blue–wearing patriots have modified and honored their various uniforms over time.

1969–1991: The Expos use interlocking letters – E, M, and B – in red, white, and blue coloring to form the logo. The E, in red, represents the team name; the M, which encompasses all three colors, represents the city name; and the B, in blue, represents baseball.

1992–2004: The Expos keep the previous logo, but add a border and a baseball background with team coloring.

2005: In 2005, the Expos rebrand as the Nationals, with similar coloring to show off patriotism for the nation’s capital. However, the shades are slightly different, and the team adds gold trim with the new banner-style logo.

2011–Present: The Nationals remove the gold trim and change up the banner-style logo for an appearance that draws inspiration from the previous Expos logo. The city and team name are encased in a ring border, and the letter W – representing the city – sits in the middle. 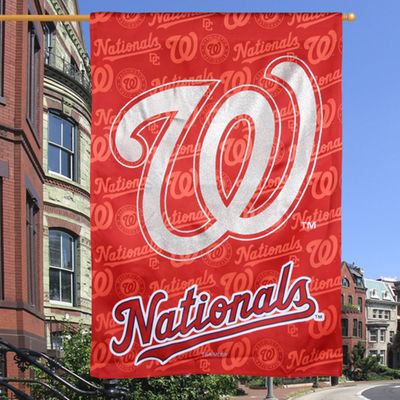 1969: The Expos use a solid-colored uniform for the team’s first year in the league. At home, the Expos wear an all-white look, with the logo and player number appearing on the chest. A mostly white hat with red trim and a blue brim is worn with both uniform combinations – at home and on the road. The team opts for a vibrant powder blue display for the road uniforms.

1980: The road uniform keeps red numbering, introduced in 1978, but the home uniform replaces it with the old blue coloring. A thick red-and-blue stripe is also added to the perimeter of the uniform.

1989: The player number and name change from blue to red on the back of the road uniforms to match the red numbering on the front.

1992: The team undergoes its first major uniform design change. The home uniform features pinstripes with the team name in blue coloring, with red trim and the player number below. The road uniform gets a similar redesign but includes the city name in red coloring on a solid gray jersey. The hat changes from white to solid blue for both uniforms as well.

2002: The Expos wear a 1972 throwback uniform for select games. The all-white combination has a minimal appearance (without player names on the back) and the original Montreal logo.

2005: Upon Montreal’s relocation and rebranding as the Washington Nationals, the team uniform gets a drastic makeover. The first home uniform sports a solid white jersey with red-and-blue trim. The team name is displayed in red with golden shading, as is the player number and name. On the road, the team wears gray uniforms with a navy blue font that is accented in the team’s colors of red and gold.

2006: The Nats introduce a red alternate uniform with a white, interlocking “DC” on the chest. Player numbers appear in a navy blue font. The caps also feature the “DC” logo design. 2009: The Nats change the road uniform by adding a new cursive-style script displaying the city name in red.

2009: A patriotic version of the team’s alternate “DC” uniform is unveiled. This one features blue as the prominent color, with red, white, and blue trim, American flag-inspired shading, and a patch on the sleeve.

2009: The Nationals unveil a red alternate uniform that mirrors the team’s 2006 “DC” jersey, with a few exceptions: player numbering and shading go from blue to white, and a cursive “W” logo replaces the interlocking “DC.”

2011: Washington redesigns the home uniform with a simple “W” logo on the chest and minimal red shading. The jersey also features red-and-blue trim along the pants, sleeves, and neckline. The numbering is placed diagonally from the team logo, as it appears on Washington’s other alternate uniforms.

2011: The team unveils a uniform with a resembling the patriotic “DC” look worn in 2009, but with the cursive “W” replacing the interlocking “DC.”

2012: The Nationals honor the Homestead Grays, a team that played in the Negro League for the first half of the 20th century. The throwback uniforms have an old-school feel with gray and navy coloring.

2012: Washington honors one of its previous teams – the Washington Senators – with throwback uniforms that mirror the look of one of the American League’s original franchises. The uniform is solid white and uses a blue cap that depicts the “W” Senators logo.

2013: The team honors the military with special camouflage uniforms. The look resembles the home uniform, but with camouflage shading in place of the traditional red. A camouflage cap matches the uniform, too.

2016: The team honors moms in the same way with pink shading on Mother’s Day. The road uniforms take the traditional look and add a splash of pink. Players also use pink equipment, including pink bats and catcher’s gear.

Today, it is fairly common for Major League teams to honor legendary players by either retiring their uniform number or inducting them into the Ring of Honor. Currently, the Nationals have retired three numbers to honor four players during the franchise’s time in Montreal. Jackie Robinson’s No. 42 was retired throughout all Major League Baseball teams in 1997. A Ring of Honor was unveiled at Nationals Park in August 2010 to praise all of the Hall of Fame members who played for the franchise – the Washington Nationals, the Washington Senators, the Homestead Grays, and the Montreal Expos. Considering that the Nats haven’t retired any uniform numbers under their name, fans are eagerly awaiting the announcement. In fact, the organization has a handful of players that will likely be up for future consideration (like pitcher Stephen Strasburg and outfielder Bryce Harper).

Heading over to Nationals Park? Make sure your gear is up-to-date by visiting Fanatics – the one-stop shop for all of your Nationals essentials!