The Evolution of the Seattle Seahawks Jersey

The Seattle Seahawks joined the NFL as an expansion franchise in 1976 along with the Tampa Bay Buccaneers.

The team is the only one based in the Pacific Northwest region, which provides them with wide geographic support from surrounding areas. In fact, they are described as having some of the loudest fans in the league! The franchise is also the only one in NFL history to play in both the American Football Conference (AFC) and National Football Conference (NFC) championship games – they played for 25 years in the AFC before switching over to the NFC in 2002 during the NFL alignment.

Throughout their history, Seattle has kept various shades of blue and green as the team’s staple colors, and they became the first NFL team to use lime green on the uniforms.

Let’s take a look back at the Seahawks jersey history to see how this Pacific Northwestern team has evolved over the years.

The Seattle Seahawks have a very brief logo history in terms of changing the original design and color scheme. Still, there have been many variations over the years to three main colors – blue, gray, and green.

1976–2001: The Seahawks enter the NFL as an expansion team in 1976. The team’s initial logo uses a bird (the sea hawk) head with a two-tone blue and green coloring.

2002–2011: Seattle gives its logo a modern feel with a sleek redesign that minimizes the green coloring in place of more navy and blue.

2012–Present: The logo remains largely the same with slightly altered coloring and the addition of silver. 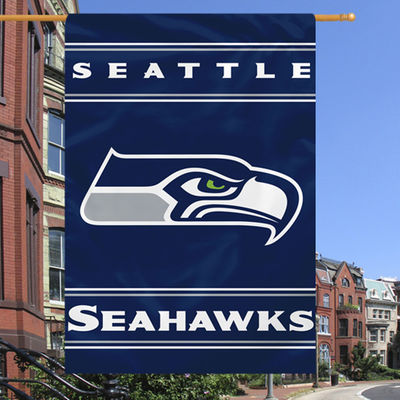 1976: The Seahawks enter the league in 1976 as an expansion team. The first uniform features a silver helmet, that displays the totem-style logo, and silver pants. At home, the team dons a blue jersey with white numbering. On the road, the Hawks wear a white jersey with blue numbering. 1981: The Seahawks keep the same look but ditch the traditional black cleats for sleek white ones.

1983: The facemask changes colors – from gray to blue. The jerseys also receive the team logo on the sleeves, which pairs nicely with the stripe.

1985: A small patch is placed on the left hip of the uniform as a dedication to the team’s 10th season.

1994: The team places a patch on the left collarbone portion of the jersey as a tribute to the NFL’s 75th season. The green striping on the pants also becomes thicker.

2000: The team celebrates their 25th anniversary with a patch on the left collarbone area of both jerseys.

2002: Seattle undergoes a significant change in its uniform for the first time in franchise history. The helmets change from silver to a gunmetal blue shade. The actual logo takes on a more aggressive design change to resemble a meaner-looking hawk.

The white uniform receives the gunmetal shading on the numbering and sleeves. The dark uniform changes from normal blue to the new gunmetal tinting with bold, dark sleeves. The two-tone coloring allows the team to use up to four uniform combinations (all gunmetal, gunmetal jersey and white pants, all white, and white jersey with gunmetal pants). Additionally, black cleats return.

2009: The Seahawks wear a lime green alternate jersey at home. It follows the same template of the white/gunmetal combination but replaces the jersey with a vibrant shade. This was the first time such a color was used in the league.

2012: The gunmetal and lime are replaced by navy and a neon-style green. The team mixes and matches with white, navy blue, and gray to serve as staple colors for various uniform pairings. After their recent success in the 2014 and 2015 seasons – grinding the gridiron to play in both Super Bowls, emerging victorious in one – the Seahawks have several new numbers to consider for future retirement.

Between the intense offensive plays stampeded by Beast Mode (Marshawn Lynch), the shotgun arm of quarterback Russell Wilson, and the defense monster himself – Richard Sherman – the Hawks have their hands full with franchise legends.

If the Seahawks keep up the success, then one thing is definitely set to change – the number of retired jersey numbers, which currently sits at a meager four!

#GoHawks! Before heading out to CenturyLink Field for the next Seahawks game, be sure to equip your assemblage with the latest Seahawks gear! For all your blue-green essentials, look no further than Fanatics – your one-stop shop for all sports fashion and memorabilia. 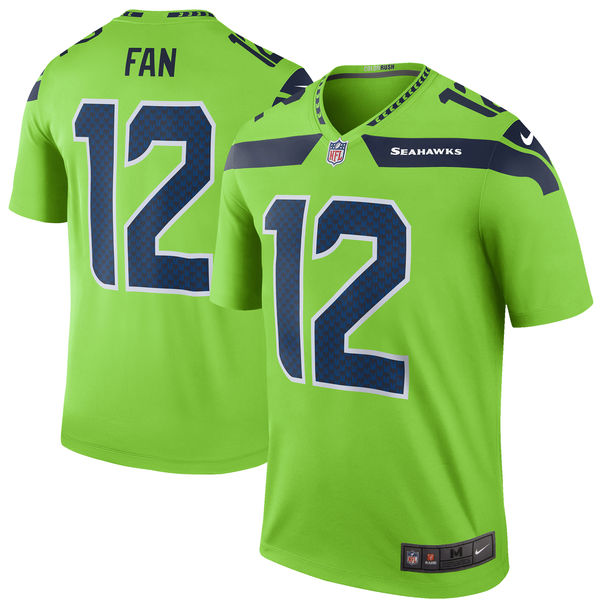