The Evolution of the San Diego Padres Uniform

San Diego, known as “America’s Finest City,” was granted an expansion team in 1969 – agreeing on “Padres” as the inaugural name. The San Diego Padres are still considered to be one of the newer organizations currently in the MLB.

The team has reached the World Series twice but is still chasing the No. 1 title. On April 8, 2004, the Padres played their first game on their own field after previously sharing San Diego Stadium (now called Qualcomm Stadium) with the San Diego Chargers. PETCO Park currently has a capacity of 42,445 seats and captures the unique culture of the surrounding region.

The young team adopted their name from a previous minor league team in San Diego. The name “Padres” is Spanish for “fathers,” which refers to the friars who founded the first Spanish Mission in the state of California.

We decided to find how these So-Cal players have transformed their logo and uniforms since their inception into Major League Baseball. Read on to discover when each change occurred throughout the history of #PadresNation.

1969–1984: The team’s first logo uses a friar in a brown robe with a bat in hand. The team name is displayed outside the image and on the bat.

1985: The Padres abandon the logo for a simplistic brown-orange display of the team and city name.

1990: The Padres add a more noticeable orange-white trim to the team name with the addition of a ring background that displays the city and “Baseball Club” in similar colors.

1991: The team ditches the brown shading for sleek navy blue.

1992–2003: The logo receives pinstripes in the background, and the light-blue/gray shading is removed for simple white on the ring.

2004–2010: The team revamps with gold and blue as primary colors. The team name is pictured on a baseball diamond with baby blue waves below.

2011: The Padres ditch the city name, but the logo stays very similar.

2012–2014: The Padres unveil a plain, interlocking logo with the letters “SD” to represent the city name. The logo is placed within a two-ring design that displays the city and team name. The yellow coloring is also nowhere to be found.

2015–Present: The Padres keep the interlocking “SD” logo, but remove the other intricate aspects for a simplistic, blue appearance. 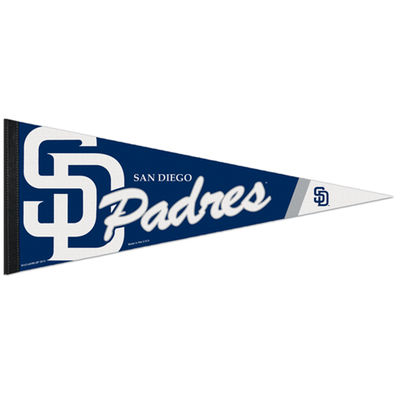 1969: The Padres use gray uniforms with the team name displayed in a brown font on both the home and away uniforms. The uniforms have gold-brown trim on the neckline and sleeves to match team colors. The team also has a road alternate uniform with the city name – a patch on the left sleeve honors the city.

1972: The Padres keep the team colors but make a radical uniform redesign, switching to mustard-colored uniforms as the primary shade. The team name is displayed at home and the city name on the road. A brown stripe is added to the neckline, sleeves, and pants.

1974: The Padres ditch the mustard-colored uniforms for simplistic white at home and gray on the road, both with yellow-brown trim. Player names begin appearing on the backs of the uniforms during this time, and player numbers now appear on the front (along with the back). 1976: The team undergoes another radical transformation, switching from button-down uniforms to a V-neck style that uses brown as the primary shade with swatches of yellow throughout. The sleeves, neckline, and city name appear in the yellow coloring the team previously used.

1978: The new brown, V-neck style uniforms receive the team name on both the home and away uniforms in a new bold, yellow font along with the city name in a smaller, less noticeable appearance. The team also uses gold pants to match the colors, switching from the simple white that San Diego previously sported.

1980: The team debuts a new color scheme on the uniform that features brighter yellow and orange. The city name and player numbers are removed from the front of the uniform. The Padres use white at home and brown on the road. San Diego also ditches the two-color uniform design for solid uniforms with team colors in trim on the sleeves and neckline.

1985: The Padres make a major uniform adjustment, going away from the yellow-brown color scheme. The team shifts to deep brown and crimson orange as primary colors. The caps change to feature the interlocking logo in orange. Pinstripes are used on both the home and road uniforms, with the team name (new logo) appearing at home and interlocking logo appearing on the road.

1999: The Padres bring in a navy blue alternate uniform with white numbering on the front. Home and away uniforms maintain their looks; numbering isn’t added. The team also unveils white alternate with navy blue coloring and numbering.

2004: The Padres debut a uniform makeover with a new logo that features blue, white, and golden yellow. Pinstripes are removed, the team places a new font on the home and away uniforms, and a new navy blue alternate is designed with gold font.

2007: The Padres introduce a camo-style alternate uniform with green print and the interlocking logo on the left sleeve.

2016: The team switches things up and wears a home uniform with interlocking ‘SD’ and yellow trim, in celebration of hosting the all-star game. Padres also debut brown throwback uniforms and a new blue camo uniform. Although the Padres have yet to win a World Series, they have definitely seen their fair share of legendary players step up to the plate with San Diego’s colors on their back. It’s safe to say that the Padres have had some of the best hitters in Major League history (like Tony Gwynn, the seasoned batter who achieved eight batting titles during his 20-year career). In more recent years, America’s Finest City has seen some impressive players take the field at PETCO Park.

The following players have all been recognized for the blood, sweat, and tears they left behind on the field:

#GoPadres! Before heading out to Petco Park, make sure you’re equipped with the top Padres essentials. Look no further than Fanatics – the ultimate sports apparel and fan gear store!