The Evolution of the Pittsburgh Pirates Uniform

The uniforms of the Pittsburgh Pirates will forever be a favorite among fans.

Reason One: They’ve co-opted the most historically feared logo humanity has ever created. Everyone knows and dreads the skull and crossbones.

Reason Two: The colors resonate with an entire city, as the hometown Steelers and Penguins also wear black and gold. Pittsburgh is the only city able to claim such a cross-sport unification of colors. They even have a famous song for the black and yellow! Collectively, the black-and-gold city ranks as the second-best city for uniforms worn by its professional teams, according to ESPN’s Uni Watch.

Reason Three: They dig their own style and often wear throwbacks. Everyone loves a good throwback.

Bucking uniform trends is a large part of the Pirates’ history. In fact, they are one of only two original National League franchises that have deviated from their original color and design scheme. 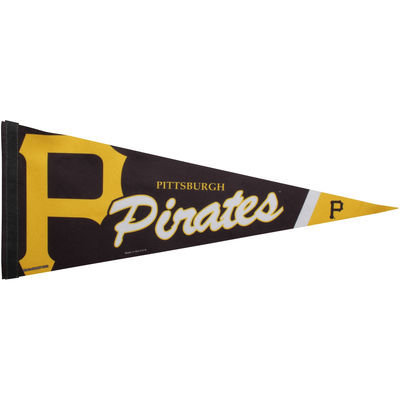 1922: For one year only, the team switches to a navy “P” in calligraphic form.

1934–1957: The franchise finally utilizes its first illustration of a pirate, with crossed baseball bats on the hat and the team name displayed below the picture.

1958–1966: The black-and-white logo receives coloring with a cartoon-like illustration and a bolder font to display the team name. The original pirate was scary. This pirate is kid-friendly.

1967–1986: The team switches up its logo to a smaller, black-and-white, less cartoonish pirate placed on a yellow treasure map.

1987–1996: The pirate receives another face-lift and another logo redesign. Now, a black hat with crossed baseball bats adorns a pirate inside of a yellow diamond, featuring the team name displayed above.

1997–2013: The logo gets back to its darker roots. The team name is displayed in yellow with a bold red-and-black trim. The pirate illustration is simplified with sharp detail and minimal coloring to accent the team name. Instead of crossbones, there are crossed bats.

2014–present: The Pirates go back to a design similar to the team’s original logos but in yellow. Also, the logo without the word “pirates” is still used on the left sleeve. 1903: The team begins by wearing uniforms with a dark collar on a button-down jersey. The stockings are dark blue and red, and the cap is solid blue with a white “P.” They even sport a gentlemanly front pocket on the left chest.

1908: The Pirates remove the front pocket and add the team’s new “PBC” to the left sleeve.

1915: The Pirates remove the collar. The team also places a red letter “P” on the left breast. The “P” on the cap changes to red to match the uniform.

1933: The Pirates return red coloring to the uniform. Instead of the letter “P,” the jerseys spell out the team name in red.

1938: A cursive “Pirates” now adorns both the home and road jerseys.

1940: The team abandons the traditional letter “P” for its first emblem, an illustration of a pirate. The patch is placed on the left breast.

1947: The Pirates briefly remove the illustration on the road uniforms and switch to a cursive script city name.

1948: The Pirates dump the cursive for a style that resembles the modern uniform. This is the first year Pittsburgh changes colors from red and blue to black and gold.

1962: A vest-style jersey with numbers is in use on both the home and road uniforms. The Pirates become the second team to wear sleeveless jerseys.

1970–early 1980s: In this decade, the Pirates separate themselves from the pack regarding their sartorial choices. Aficionados call it the “Bumblebee Era,” but there were many quirks, including a couple of “We Are Family” seasons and the “Stargell Stars” years.

Among other innovations, the ’70s Pirates pioneer the pullover and sleeveless jerseys; conquer elastic waistbands and ditch the belt; and change the uniform industry by going from flannel to stretch-knit material.

Late in the decade, the Pirates commemorate the National League centennial by wearing pillbox hats, striped to resemble a bumblebee. Many National League teams follow suit, but all other teams go back to convention in 1977. Not Pittsburgh – they took it further.

1977: The 1977 Pirates change the history of uniforms, paving the way for teams like the Oregon Ducks today.

Jerseys and pants each come in three designs – black, gold, and white with thick gold pinstripes – allowing for dozens of different outfits. With a bottomless well of freedom given to players on field attire choices, team captain Willie Stargell has equipment managers sew “Stargell Stars” onto caps – an award for a spectacular or crucial play, in the tradition of college football.

The practice eventually spreads even to batting helmets for the Pirates.

1980: Player names appear on the uniforms.

1990: The Pirates revert to the cursive script used on 1950s road uniforms.

2001: With a new park comes a new vest uniform for both home and road. The Pirates also become the first team ever to wear a cap with a red under bill.

2007: The club introduces a sleeveless red jersey to be worn as an alternate home uniform.

2016: The white home uniform uses a simple “P” logo on the cap, with the previous Pirate logo placed on the left sleeve. The normal road uniform is gray and displays the city name, while the Pirates occasionally use a black uniform with a yellow “P.” The team also unveils a yellow alternate uniform with the old pillbox-style cap, a tribute to the 1979 team. With a talented team and a solid mix of young athletes and veterans, the Pirates have been playing as sharp as they look for the past few years. Reverting to their revolutionary “glory days” uniforms can only help.

#LetsGoBucs! Make sure you’re equipped with the latest Pirates gear before heading out to PNC Park or your next viewing party. Fanatics has it all!