The Evolution of the Pittsburgh Penguins Logo

The Pittsburgh Penguins first took to the ice in 1967. It was more than three decades after the city’s first NHL team, the Pirates, folded during the Great Depression. The new Pittsburgh team was part of a six-team influx of new hockey clubs and a contest that tasked the public with choosing a new club name.

But Jack McGregor, who was part owner of the new team, found inspiration for a name from within his own home. His wife, Carol, was inspired by the team’s future home, which was nicknamed “The Big Igloo,” and she thought “Penguins” would be a perfect name. It’s possible word of their idea leaked, and more than 700 entries in the contest featured the same moniker; they made it official on February 10, 1967.

Several notable players have hit the rink for the Pens, including “The Magnificent One” Mario Lemieux, who holds four major all-time Penguin records (games, goals, assists, and points); Jaromír Jágr, who spent his first 11 NHL seasons in Pittsburgh; and Marc-André Fleury, who was the overall No. 1 selection in the 2003 NHL Draft.

The Penguin and the Golden Triangle

Once the team was established and its name chosen, the next step was finding the right logo. The original logo featured a skating penguin, stick in hand within a golden triangle, which represented the “Golden Triangle” of downtown Pittsburgh. This logo, however, did not appear on team uniforms when they first took to the ice.

The logo didn’t stay this way for long; it underwent several changes over the last 40-plus seasons. Let’s look at how each one changed over the years. 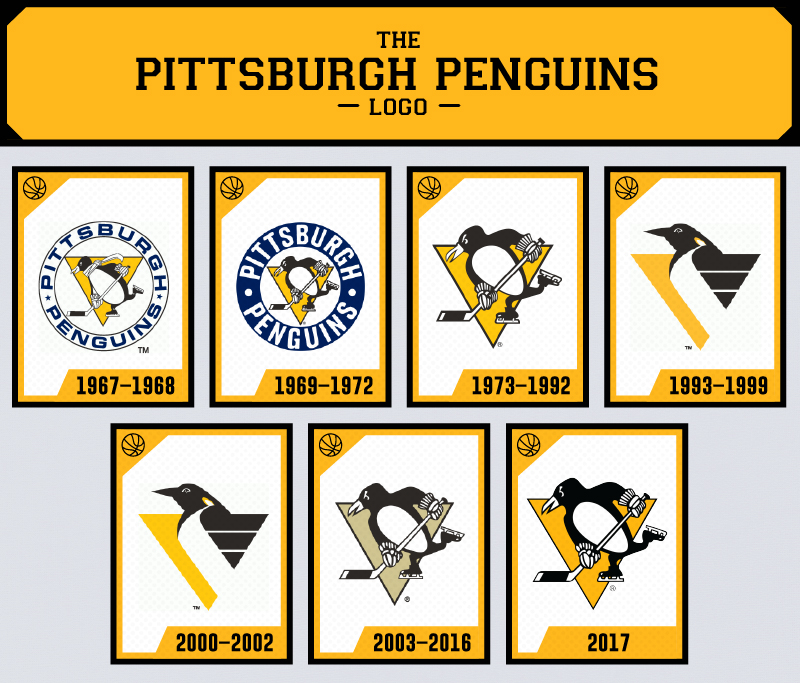 1967/1968: The first Pittsburgh Penguins logo features a penguin wearing a scarf and skates while brandishing a hockey stick. He’s imposed over a golden triangle; “Pittsburgh Penguins” appears in a circle around the penguin.

1973–1992: When the season arrives, a new logo is unveiled. This penguin appears much the same as his predecessor, but the circle and team name within the design vanish.

1993–1999: With the 1992–1993 season, the Penguins logo gets a bold new look. The penguin and golden triangle are still present, but they take on a more streamlined, modern style; they’re blended into one picture.

2000–2002: Not much changed with this logo, except the shade of gold features a slight adjustment.

2003–2016: The more modern penguin logo, despite lasting for over a decade, never really caught on with faithful Penguins fans. Mario Lemieux, who purchased the team in 1999, expressed a desire to return to the skating penguin. In the 2002 to 2003 season, this became a reality, and the old-school skating penguin and his trusty triangle return to the Penguins, although instead of the traditional Pittsburgh gold, they opt for another shade.

If you’re heading to PPG Paints Arena to catch the Penguins in action or just digging the new merch from your favorite NHL team, check out Fanatics.com. Grab jerseys, stocking caps, or even a onesie for your favorite niece or nephew.