The Evolution of the Green Bay Packers Logo

Wisconsin: The land of beer, cheese, and … football! That’s right, America’s Dairyland has more to offer than just cheddar. In fact, Wisconsin is home to one of the most historic football franchises in the league: The Green Bay Packers. The saga of the Packers really took off after the team joined the new National Football League in 1921, under the direction of the Indian Packing Company (later purchased by Acme Packers, hence the team name) and captain Earl “Curly” Lambeau. The team lives on today as a current member of the NFL’s National Football Conference North along with the Detroit Lions, Minnesota Vikings, and Chicago Bears.

The Packers’ past is highlighted by their notable accomplishments achieved throughout their time in the NFL. The squad has appeared in five Super Bowls and has emerged victorious four times – including a win against the Kansas City Chiefs in 1967 during Super Bowl I. Dubbed “TitleTown USA,” Green Bay has 13 titles – the most in league history – with nine championship wins and four Super Bowl victories. Much of the team’s early success is credited to two dominant figures in the franchise: Lambeau and Vince Lombardi. Both served as head coaches and brought home a combined 11 titles to the Bay.

Over the course of their storied history, the Packers have had many gridiron greats fill their all-time roster. Hall of Famers Tony Canadeo and Bart Starr dedicated their entire careers to the Packers and were catalysts for the team’s initial success. Modern-era players like legendary quarterback Brett Favre and running back Ahman Green have both made names for themselves in the franchise as the all-time passing and rushing leaders, respectively.

Take a “Lambeau Leap” with us as we explore the evolution of the Green Bay Packers logo throughout their rich history playing in the NFL. 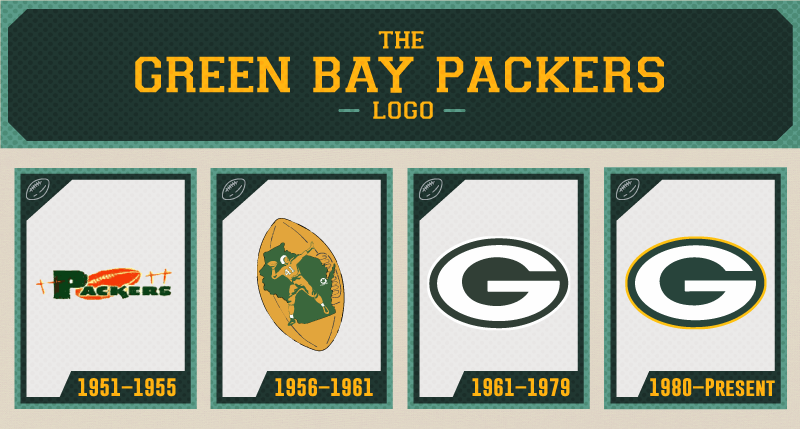 The Green Bay Packers have used four different logos since their inception into the NFL in 1921. The Wisconsin-based squad is known for their primary colors of forest green and cheese gold – a nod to the dairy farmers across the state. The team’s iconic “G” logo was crafted in 1961 at the hands of equipment manager Gerald Brashier and art student John Gordon. As one would expect, the “G” stands for “Green Bay,” but schools utilize similar logos across the nation, like the University of Georgia (with the Packers’ permission, of course).

1951–1955: The first logo of the Green Bay Packers utilizes an orange, yellow, and dark green color palette. The wordmark “Packers” is displayed in green block font with an orange football decorating the background. Orange goal posts are placed on either side of the logo and are outlined by a faint yellow color.

1956–1961: Beginning in 1956, the Packers change their logo to a quarterback in a throwing stance. The figure is overlaid on top of a green-filled state icon of Wisconsin with a star badge indicating the geographical location of Green Bay. The design is placed over an off-gold-colored football.

1961–1979: The team rebrands and creates Green Bay’s most iconic logo: the “G.” Following a simplistic design, the logo features a bold white “G” placed inside a green oval. This primary logo closely resembles the 2016 emblem used by the Packers.

Catching a Packer can be quite the experience for die-hard fans. Don’t embarrass yourself the next time Aaron Rodgers or Jordy Nelson is in your grips – show your support by decking out in the latest Green Bay Packers merchandise. Head over to Fanatics.com for all of your green-and-gold gear!