The Evolution of the Dallas Cowboys Jersey

An appropriate choice of name to represent the Lone Star State, the Dallas Cowboys were established in 1960.

The Cowboys have one of the league’s most iconic uniforms with simple, yet recognizable blue and white colors. The team has changed it up over the years, but the blue uniform is still traditionally worn at home, while white is worn on the road – both of which use a silver helmet and pants.

Known as “America’s Team,” the Cowboys have five Super Bowl championships and are one of the most valuable teams in the world, with an approximate valuation of over $4.8 billion. You know what they say – everything’s bigger in Texas!

Let’s take a stroll down memory lane into how the Dallas Cowboys’ jersey history has evolved through their nearly 70 years of existence.

Ever since their inaugural season in 1960, the lone-star logo and blue color scheme have remained as constant symbols of the Cowboys. Just about everything else about the Cowboys unis, however, has been tweaked or changed throughout the 50-plus years of their existence. The Cowboys may be known for their dark-blue style now, but their humble beginning in 1960 saw them identify with the royal blue and white colors.

This debut jersey featured a white helmet to match the numbers and shoulders, with a simple two-tone coloring giving Dallas a simple, yet majestic look that helped to foster the Cowboys’ iconic branding they developed over the decades yet to come.

The white helmets didn’t last long. In 1964, the Cowboys ditch the white hats for silver helmets, introducing silver into Dallas Cowboys lore for the first time.

In conjunction with the new silver helmets, the Cowboys give their logo the only face-lift it’s gotten — the addition of a bold white border around the blue star that is still seen today. In 1967, the Cowboys lose the v-neck and opt for a crew neck design, and also reduced the sleeve stripes from three to two. What appeared to be a subtle change at the time — removing one stripe — would eventually become a staple of the sleeves on the Cowboys’ unis.

Dallas experimented with the shoulder numbers by moving them down below to the sleeve in 1970, but they quickly made their way back in the years to come. A specialty design in 1976 saw the helmet stripes change to red, white, and blue to commemorate the United States’ bicentennial anniversary.

Often wearing silver pants to match the royal blue tops, it wouldn’t have been hard to confuse the Cowboys back then with the Lions or Colts, who both sported similar blue-silver looks. 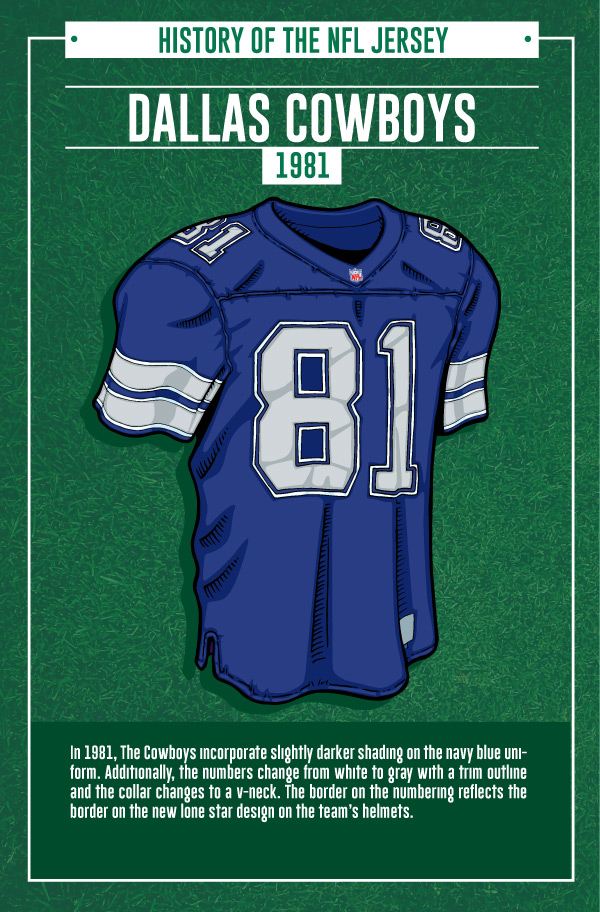 The piercing navy blue that defines Cowboy football today was introduced in 1981. The Cowboys tweaked their color by shifting from royal blue to the modern-day dark blue, and accentuate the change by adding the silver coloring to the numbers. The v-neck makes its return, and long after the 1970 AFL-NFL merger, the league shield is brightly emblazoned in its permanent spot on the collar.

In 1982, the pants receive a small numerical circle around the hip area that features each player’s number.

It’s no secret why this jersey is so easy on the eyes for football traditionalists. Dallas celebrated back-to-back Super Bowl wins in 1994 with a special double-star jersey on Thanksgiving, worn by legends Troy Aikman and Emmitt Smith. The Cowboys also wore a throwback version of the team’s 1960 uniform to help the NFL celebrate its 75th anniversary. In 1996, the word “Cowboys” is added to the neckline, which currently remains on the blue jersey. The team also illuminates the collar with a silver-white stripe, another change that fans can still see on today’s threads.

The Cowboys threw one back in 2004, unveiling a remake of the 1960 uniform on Thanksgiving Day. A modern-day version of the debut jersey becomes a regular staple as the Cowboys’ alternate jersey.

Reflecting the NFL’s move to Nike in 2012, the uniform receives subtle design changes in detailing and coloring to give the appearance of modernity. In conjunction with the NFL’s Color Rush jersey launch in 2016, the Cowboys unveiled an all-white throwback version of the double-star uniform that came to fame in the 90’s.

As it did with many other tradition-rich franchises, the NFL gave the Cowboys a chance to honor their past while keeping in line with the color vs. color scheme. The all-white jersey brings visions of Troy Aikman and Emmitt Smith leading the Cowboys to championships in the glory days. Today, the Cowboys’ iconic jersey design is rooted in the history of the Dallas organization as much as any uniform in professional sports.

All you have to do is stroll through the Cowboys’ jersey history to see where certain features originate. The retro 1960 jersey, the addition of stripes in ’67, the navy-blue resurgence of the ’80s and the modern-day accents from the ’90s all played a part in molding the Dallas Cowboys unis to what they are today.

The nucleus of quarterback Dak Prescott, electrifying rusher Ezekiel Elliott and defensive stalwart Leighton Vander Esch may be young. But every time they take the field, they throw on a jersey every game that is steeped in history and embodies their organization’s tradition like few others in sports. 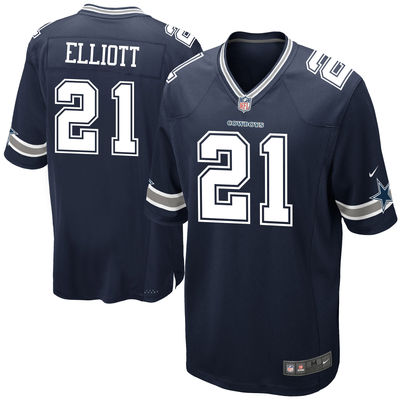 One shocking fact about the Dallas Cowboys is that their current team logo has only undergone one facelift. Typically, younger teams, such as the Houston Texans, are noted for having a few logo changes. Since their inception into the league, the Cowboys have continued to stay true to their home state by representing the blue star on the field.

1964–Present: A simple border outlines the star to make it pop. Setting themselves apart from the rest of the teams in the league, the Cowboys opt to induct players’ names into the Ring of Honor rather than retiring their jersey numbers. The tradition began on Nov. 23, 1975, and has since been known as “Bob Lilly Day.” Currently, 21 names of former coaches, players, and club officials wrap around the stands of AT&T Stadium in Arlington, Texas.

Before charging out to AT&T Stadium, are you sure that you’re the best-dressed Cowboys fan out there? Ensure your passion is on display with our Dallas Cowboys fashion and merchandise. Head over to Fanatics – your one-stop shop for all your Cowboys essentials!