Rivalry is a key component of league play. In soccer or baseball, a strong rivalry helps to bring context and meaning to a contest – either for a key place in the post-season or just a pre-season match-up. Whether fueled by bad blood between the teams, players, coaches, and/or owners; marketing conflicts because of geographic proximity; or simply because of a twist of fate – such as being in the same division – a well-contested rivalry can transform an average game into essential viewing, worthy of all the heated arguments and physical scuffles that come with it.

Cross-town rivals almost exclusively belong to different conferences in the NFL, and the NFL’s schedule is set up so that a team plays every other team in the league at least once every four years. Because of that, it is difficult – but not impossible – for rivalries to form in the NFL. Take, for example, the AFC North rivalry between the Pittsburgh Steelers and the Baltimore Ravens. The Steelers have won three of the four playoff meetings between the two teams, so there are some heightened emotions during the two teams’ meetings. Proof of this occurred during a meeting in 2014, when Steelers’ coach Mike Tomlin stood too close to the field and was accused of blocking Ravens’ punt returner Jacoby Jones. It is unclear whether the action was intentional.

The granddaddy of all NFL rivalries is between the Chicago Bears and the Green Bay Packers – it started in 1921, making it the longest continuous rivalry in all of professional football. This rivalry – started by a feud between the teams’ founders and fueled by market overlap – has produced 22 league or conference championships, five Super Bowl appearances, and 59 Hall of Famers.

Every fan, however, has an opinion of the greatest rivalry. Fanatics asked 3,000 fans which team they consider the biggest rival of their favorite team. Surprisingly, a few boogeymen emerged as perennial league “bad guys.” What makes a rival? For many, it’s a memorable opponent in the NFL that is likely to make fans root and boo for a team on the mere mention of its name. 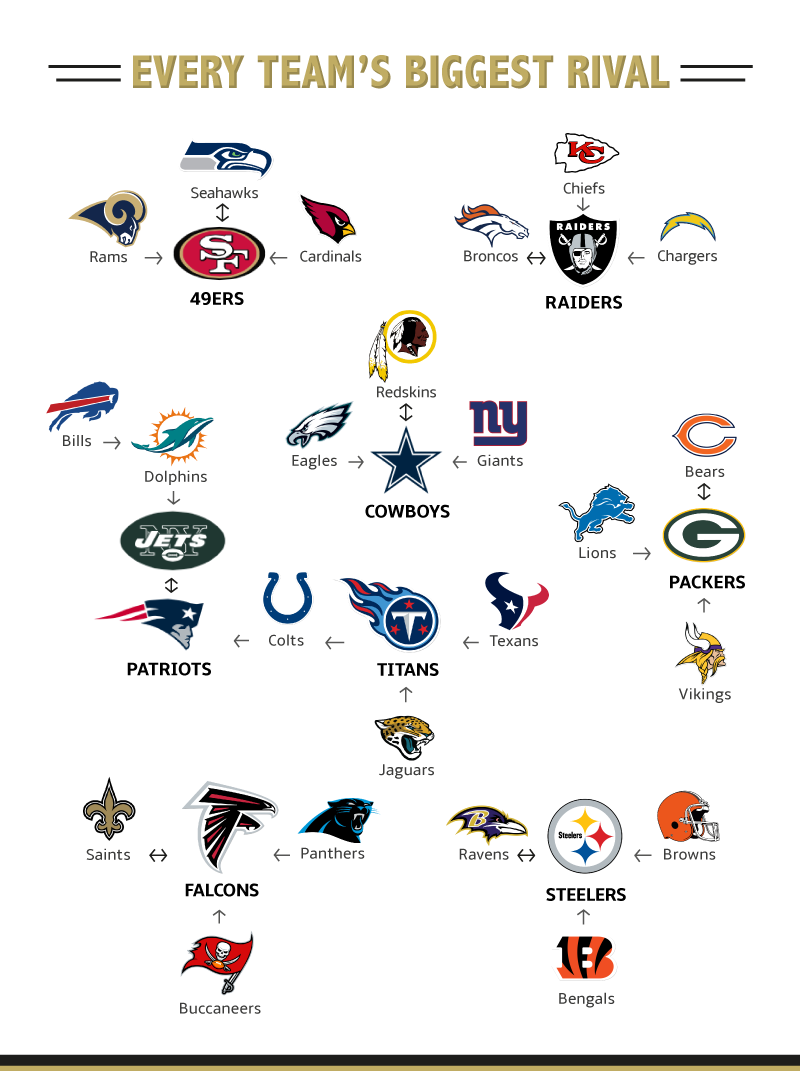 On Naming the Bad Guy

When looking at the teams that fans believe are their favorite teams’ greatest rivals, a few truths emerge. First, rivalry typically happens within a division. Take, for example, the AFC West; according to poll respondents, the Kansas City Chiefs’ and the San Diego Chargers’ biggest rival is division-mate the Oakland Raiders. However, fans believe that the Raiders’ biggest rival is the Denver Broncos, also in the AFC West. Similarly in the NFC West, the San Francisco 49ers is the fans’ choice as the bad guy to division-mates the St. Louis Rams, the Arizona Cardinals, and the Seattle Seahawks.

The reason rivalries tend to stay within divisions is simple: The NFL has 32 teams and a 16-game schedule, so it is unthinkable to imagine a team playing every other team in the league or even in its own conference. A team is likely to play against another team in their own division two or three times a season, so it’s easier for fans to get riled up over divisional matchups. Additionally, as placement in the post-season is dependent on a team coming in first or second in their own division, division match-ups – particularly toward the end of the regular season – carry additional weight.

Another truth revealed by the fans’ choices is that grudges die hard. The 49ers and the Rams have one of the most intense rivalries in the league today. While the Rams were still in Los Angeles, the two teams competed for market share, and that animosity occasionally seeped onto the field. However, the Rams’ move to Missouri didn’t defuse the rivalry, and may have even added to it – considering the culture clash between the West Coast and the Midwest.

The final truth is that some rivalries only make sense to a student of football history. In the AFC East, for example, the Buffalo Bills’ biggest perceived rival is the Miami Dolphins. Besides being division-mates, neither team has been in playoff contention in years – considering that the other two teams in this division are the New York Jets and the New England Patriots. So, a rivalry doesn’t seem to make sense.

A student of the game would remember that – not too long ago – the Bills were an AFC powerhouse, dominating the conference in the late ’80s and early ’90s. The Bills’ dominance was so absolute that the team had four consecutive conference championships from 1990 to 1993. Despite their post-season proficiency, though, the Dolphins are currently leading the Bills in wins in their matchups, 57-42-1.

The Boogeymen of the Gridiron

Ani DiFranco once sang, “God forbid you be an ugly girl, ’course too pretty is also your doom, ’cause everyone harbors a secret hatred for the prettiest girl in the room.” The NFL is a classic example of this mentality. The teams that garnered the most votes for being the biggest rivals are the most successful teams in the league’s history. The top vote-getter, the Dallas Cowboys dominated not only the NFC East, but also the entire league in the ’70s and early ’80s. The most valuable team in the world, the Cowboys is the only team to have 20 consecutive winning seasons (1966–1985) – of which, the team made 18 playoff appearances. The Cowboys are currently second only to the Steelers in Super Bowl wins (five) and share the record for most Super Bowl appearances (eight). The team also holds the record for most consecutive sold-out games at home and away (190), making the Cowboys the definitive “pretty girl” of the league.

Tom Brady’s continuing dominance of the quarterback ratings propels the New England Patriots to No. 2 on the rival list. Prior to Brady’s emergence as the team’s starting quarterback, the Patriots did not rank high as a potential threat, which illustrates that a rivalry can be fueled by just one person. Other teams that rank high as perceived rivals are the Oakland Raiders, the Pittsburgh Steelers, the Green Bay Packers, and the New York Jets.

Among the teams least perceived as rivals are the Detroit Lions, the Arizona Cardinals, the Tampa Bay Buccaneers, the Minnesota Vikings, and the St. Louis Rams.

Of the major football systems, NFL rivalries are relatively weak. Despite the general lack of drama, rivalries between the NFL franchises – in their limited way – have driven teams to play harder through the history of the league. The rivalries have also made casual viewers into fanatics and have infused local pride into the Nation’s Game – while it is difficult to imagine anyone willingly driving from Chicago to Green Bay, Wisconsin, to see a game, it makes more sense when one realizes that Bears fans and Packers fans have hated each other since the 1920s, when Bears (then named the Staleys) guard John Taylor sucker-punched Packers tackle Howard Buck and broke his nose after the Staleys shut out the Packers 20-0.

The notion of having a boogeyman to root against fuels this game and drives those who put on the padding to run faster, hit harder, and to do more to win. Ultimately, rivalries are what power the league and without them, the game would be more boring for everyone involved.

We surveyed 100 fans of every NFL team and asked who their favorite team’s largest rival is. We then analyzed the responses to find which teams are part of the biggest and most rivalries in the NFL.

The Greatest Baseball Teams Ever