Baseball Players All Shapes and Sizes

While athletic ability is an essential part of being a Major League Baseball player, there are absolutely no size or shape requirements for being added to a big league roster. If you play hard and tick all the boxes managers are looking for, you can make it as a pro player regardless of how short, tall, thin, or heavy you are.

Let’s take a look at current MLB players to see where they fall in the height and weight departments.

A Spectrum of Sizes in the MLB 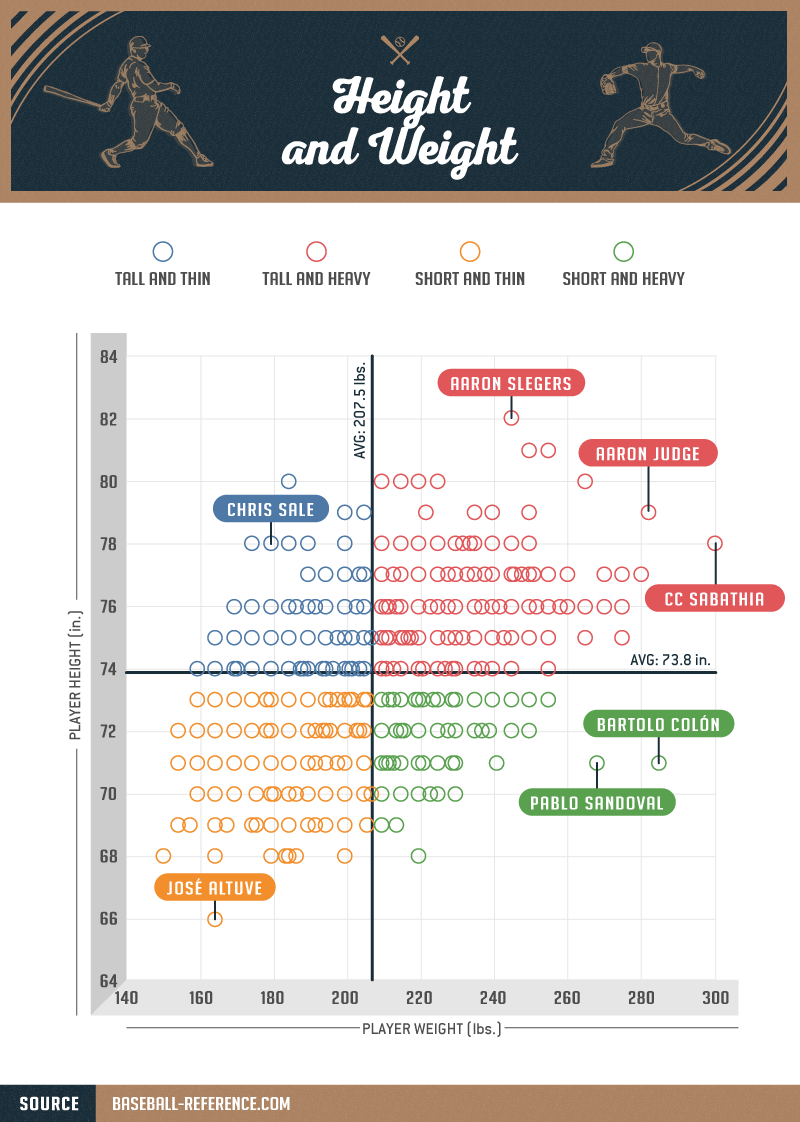 Most players tend to gravitate toward the middle of the scatter plot shown, which signifies player height and weight averages. The average weight of an MLB player is roughly 207 pounds, and the average height is about 74 inches (or 6 feet 2 inches). Players’ natural biology can obviously stray from these averages, which can greatly impact their presence on the field.

For example, a player who is on the shorter and lighter side, like New York Yankees player Ronald Torreyes (5 ft. 8 in., 151 lbs.), definitely takes up less space than teammate (and opposite in body type) Aaron Judge, whose imposing figure rises up 6 feet 7 inches and weighs 282 pounds. Comparisons between the two are natural, not only for Yankees fans but also national media.

On the other hand, some players are both tall and thin, like Boston Red Sox pitcher Chris Sale. His physique has certainly been no detriment to his career, as he currently has a sub 3.0 ERA and has been selected to the All-Star Game six times over his eight-year career.

For those players who are shorter and heavier than their counterparts, they certainly don’t let their size slow them down. Pablo Sandoval, for example, is 5 feet 11 inches and 268 pounds and has helped the San Francisco Giants win the World Series three times. Another player in this quadrant of our chart is Bartolo Colon, who is still pitching strong in his 40s. “Big Sexy” is a big guy indeed, and while not above average in height (5 ft.11 in.), he’s one of the heaviest MLB players at 285 pounds.

Welcome to the Wide Range of Baseball Players 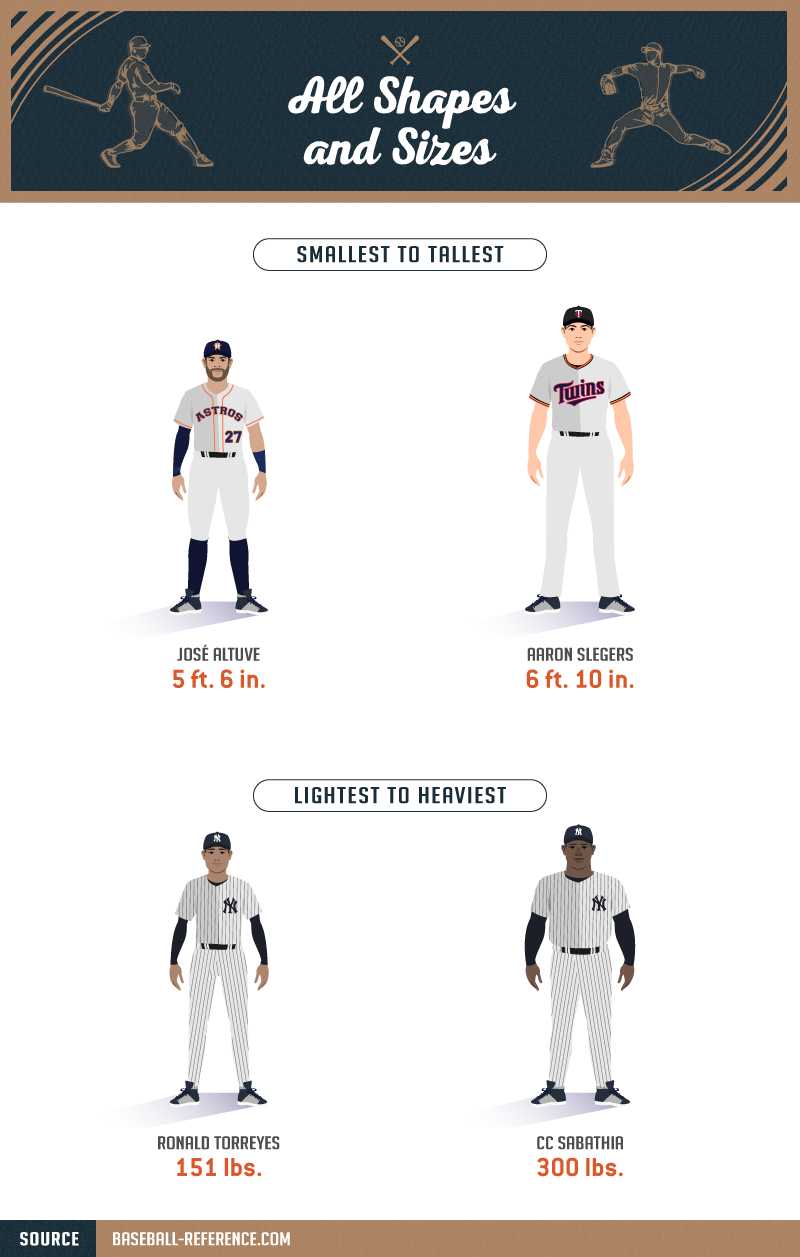 The shortest current MLB player is a defending World Series champion. Houston Astros second baseman José Altuve stands at 5 feet 6 inches tall. Compared to pitcher Aaron Slegers, a 6-foot-10-inch righty who’s currently in the Twins minor league system (on their 40-man roster), the difference in size is quite remarkable. Until MLB teams expand to the 40-man roster in September, or unless Slegers gets called up to the bigs, it’s unlikely he’ll be on the field at the same time as Altuve. However, Altuve and the second tallest MLB player, Aaron Judge, do face each other this season – will there be more photo ops in store for this incredible duo?

The lightest player mentioned above is Ronald Torreyes, weighing in at 151 pounds, and the heaviest MLB player is actually on the same team. The southpaw Yankees pitcher CC Sabathia weighs almost twice what Torreyes weighs, tipping the scales at 300 pounds. We also looked at the average height and weight of baseball players and found they tend to vary by position. Overall, pitchers tend to be on the taller side (an average of 6 ft. 2.5 in.) and of average weight (around 210 lbs.), while catchers tend to be a bit shorter and heavier. Perhaps all that crouching is easier if you’re not super tall, and a greater weight might help center your gravity a bit more. Catcher averages are around 6 feet tall, and the average weight is around 214 pounds.

First basemen also tend to be a little taller, averaging 6 feet 2.5 inches (similar to pitchers), which gives them a longer reach than shorter players. This is crucial for the position since first basemen receive throws more often than other position players, and the element of “hurry up and throw the batter out” can cause some throws to be less than ideal.

Second basemen, on the other hand, average short and light, roughly 5 feet 11 inches and 191 pounds. Second basemen get a lot of action when there is a double play option, which most commonly goes from shortstop to second to first. Third basemen are also not huge, typically, with an average height of 6 feet 1 inch and weight of 210 pounds.

The other infield player is the shortstop (positioned between second and third) – a player who gets a ton of action on routine grounders by batters who bat right. Shortstops are on the low end of the weight spectrum, at around 191 pounds, with an average height of around 6 feet tall.

The three outfielders go from shorter to taller, left to right, and from a weight perspective, the center fielder is the smallest – probably due to the massive amount of range these players need to have. While you don’t have to be light to be fast, it certainly helps.

Time for Your Weigh-In

If you’re ready to take to the field and get weighed in (or head out to your favorite team’s stadium or hit your local pub to catch a baseball game), make sure you’re sporting some authentic MLB gear from Fanatics.